In this case, simple structure, easy to deploy, good mobility and no cabling make the wireless communication network a preferred solution. Based on the tunnel's the narrow, curved and complex wireless transmission environment of, IFLY's technical team has developed a secure and stable communication system that 4G LTE wireless private network works as the main communication means and supplemented by self-forming mesh network as a supplementary.

This paper presents the communication system network's entire deployment process with professional case analysis for reference to other similar projects.

Purpose Of This Demonstration is to:

Equipment Involved In The Demonstration:

1. In the first Test Scenario: Testing The Signal Coverage Capability of 4G private Network Equipment in the Tunnel

This testing is special designed to verify the coverage capability of the 4G LTE emergency wireless communication network in the tunnel and this ability can be verified by the CPE's extreme backhaul capability.

In the test, Video is captured by a H.265 HD camera (the helmet camera is configured with 2Mbps bandwidth), and voice is captured by broadband trunking handset. The testers carry the manpack CPE gateway router and the helmet cameras to walk along the subway in the tunnel. During the walking, they will record the position where the video is stuck and the location where the CPE lost connection.

2. In the Second Test Scenario: 4G LTE Private Network + MESH Radio To Expand The Coverage Range In The Tunnel

This test scenario is used to verify the network expansion capability of MIMO MESH Radio in complex environments. In the area covered by the 4G private intelligent wireless emergency communications networks,  when the 4G LTE signal strength is -95dbm~-103dbm, the LTE private network CPE still has stable data backhaul and the bandwidth is about 4Mbps~5Mbps. However if keep moving on, the bandwidth will drop or even lose connection. At this time, add a MESH relay device and take advantage its cascade connection function to solve the bandwidth attenuation problem. This way the 4G LTE wireless communications networks coverage distance can be expanded to cover whole of the tunnel area.

The 4G LTE all-in-one design portable base station is deployed at the entrance of the tunnel, and the entire deployment takes 10 minutes including the antenna installation.

The 4G LTE Portable Mobile Wireless Communication System supports wired and wireless access. Therefore, the multimedia dispatch console in command center is deployed in a secure area near the base station for mobile command and dispatching and monitoring video backhaul. When the CPE is powered on, the real-time video will be transmitted back to the portable dispatch console.

4. Process of The Testing

At the beginning, the testers carry 4G LTE CPE (equipped with a helmet-mounted camera) and 4G LTE broadband trunking handset enter into the tunnel and walk along the railway track. In the figure below, the green part indicates the voice communication and video backhaul are smooth and the whole length is 1.06km. The yellow part shows the video is not smooth, and the total length is 0.12km. The red circle means the connection is lost. During the whole testing, the voice was clear and smooth.

According to the above testing result of covering ability, we put deploy two MESH radio devices as the following configure show to expand the signal covering range.

Then the tester walked along the railway track holding a mesh radio No.3 with a helmet HD camera and a broadband trunking handset accessing the mesh network by wifi for video and voice transmission with command center.

The tester walked until the end of the track, and the video is smooth and clear. The following is the screen shot of the monitor in command center.

Through this testing, it can be concluded that the wireless private network communication system based on 4G and MESH self-organizing network has the following advantages in subway tunnel engineering applications:

This test verifies the rapid deployment capability of the portable disaster relief communication system. The system is highly 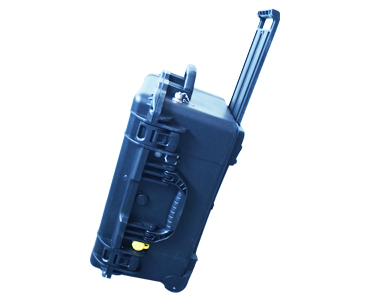 The housing adopts military standard tri-proof design for waterproof, dustproof, shockproof and drop resistant. Its internal structure and portable design is specifically for emergency communication during natural disaster. In an emergency, it can be rapidly deployed within 10minutes. In the emergency rescue situation, one-click boot and plug-to-play can save much time for first-responder to save more lives.

No need to configure and change parameters and providing signals coverage to rapidly deploy a stable private network make it is a first choice for emergency rescue, temporary communications and microwave communication.

Where is the tunnel built, where the wireless network is deployed.

After the system deployed, the network, standard WiFi and network ports are available, which can provide wireless transmission channels for various services such as personnel positioning, attendance, and mobile office.