Today, connectivity is becoming more and more important for marine applications. Getting and keeping connected at ocean so that the ships can move safely is a big challenge.

IFLY 4G LTE private network solution can solve this problem by supplying the ship a stable, high speed and secure network. Let's learn how the system can help.

2.Purpose of Testing is to:

④ What is the download rate of the mobile terminals on board when the base station is deployed in the air with the helium balloon?

⑤ How about the network speed of the mobile terminals on the ship with the base station deployed in the air by the helium balloon.

⑥ Verify the impact of the base station antenna on the wireless coverage as it swings with the balloon in the sky.

3.Equipment Involved In The Testing:

Built Up the Entire Testing System

Install the base station 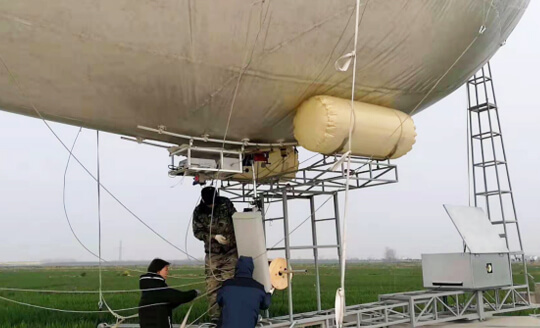 The LTE private network all in one base station is deployed on a helium balloon 4km far away from the shoreline. The maximum height of the helium balloon is 500 meters. But in this test its actual height is about 150m.

Deploy 10watts CPE (Knight-V10) on board

The notebook on the ship connects to the CPE through a network cable and connects to the remote FTP server through the CPE. The notebook’s FPT software and the remote FTP server are together to used to do the FTP download testing. At the same time, the traffic statistics tool running on the notebook can record the internet flow and rate in real time. The other testers use mobile phone or and a pad to connect to the WLAN covered by CPE for surfing the Internet in the cabin, such as watching an online movie or making a video call to test the Internet speed.

The Base Station's Configuration

NC: is configured as 8

At 15:33 on 3rd April, the fishing boat sailed out, and at 17:26, the balloon was lifted to a height of 150meters and hovered. Then the CPE wirelessly connected with the base station normally, and at this time the fishing boat is 33km far away from the station.

The notebook on the ship did FTP-download, and the target file size is 30G. The pre-installed BWM software recorded the real-time internet flow and recorded the GPS information in real time through the mobile phone.

Other staff members on the fishing boat accessed the Internet via WIFI to watch online video and made video calls. The online video is smooth and video calls voice is clear. The whole testing is 33km-57.5km.

On 5th April, all the stuff members on ship returned back to shore and finished the testing.

Analysis of The Testing Result

The coverage angle of the antenna is basically the same as the ship's route. From the CPE signal strength, it can be concluded that the signal jitter is relatively small. In this way, the directional pan-tilt antenna can basically meet the signal coverage requirements in Ocean. During the test, the directional antenna has a maximum off angle of 10°.

The Record Of FTP

The right figure shows the FTP real-time download rate and the corresponding GPS location information are reflected in the map. During the test, there were several data traffic jitters, and the signal in most areas was good. The average download rate was above 2Mbps, and the last lost connection location(63km away from the shore) was 1.4 Mbps.

From the CPE access to the wireless private network to it lost the connection, the online video watched by the staff members is very smooth and no stuck.

Refer to the following figure:

Suggestion: Set NCS to the farthest setting in next time testing and pay attention to the system’s throughput and the number of connected users when NCS is set to different configuration.

IFLY technical team gained valuable test data and experience through this testing. This test verified the network coverage ability of the TD-LTE wireless private network system in the marine environment and the signal coverage capability in the ocean. At same they also obtained the download rate of the high-power CPE at different sailing distances and the user experience after the mobile terminals access to the Internet.