Blog
Home » Blog » Application Case » How to help first-responders keep a smooth communication with during a wildfires?

How to help first-responders keep a smooth communication with during a wildfires?

On March 30, 2019, a forest fire broke out in Sichuan Province, China. After more than 1,300 people struggled for nearly 20 hours, the fire was finally extinguished. 31 people were killed in the fire.

Wildfires are particularly common during hot and dry periods. They can occur in forests, grasslands, brush and deserts. With sufficient wind they can rapidly spread in only a matter of hours and pose a threat to public safety, civilizations and wildlife alike. So once the fire occurs, the fire department must immediately act to arrive in scene to prevent, control and suppress the fire.

However one of the biggest challenges the firefighters face during a wildfire is communication. In a fire emergency, responders on the scene must deploy in minutes. So the communication network also need to be deployed minutes and work stable during complex environment. In reality, deploying an disaster relief communication network in wild always meet the following challenges:

As we all know, 31% of the earth is covered by forests. These areas are usually remote, inaccessible, sparsely populated, and have no communication signal coverage. Firefighters will face enormous challenges once a fire breaks out. How to quickly mobilize departments at all levels to rush to the scene? How to quickly set up an emergency communication network to achieve 100% coverage signal?

2. A large number of rescue workers will make the commanding and dispatching work difficult to conduct.

In a forest fire rescue operation, due to the large disaster area and complex environment, a large amount of human resources will usually participate in the rescue work. However, cross-departmental staff scheduling is often very difficult. How does the command center scientifically unify and dispatch resources reasonably? How to get real-time dynamic information of on-site force deployment?

At the disaster relief site, the disaster situation is affected by wind, water, fire and other factors at any time and is unpredictable. What’s worse, the scene is full of smog and the visibility is extremely poor. This requires the communication terminals to be waterproof, explosion-proof, anti-drop, etc., to adapt to various application environments. At the same time, it must ensure that the communication is not interfered and interrupted, and work stable. 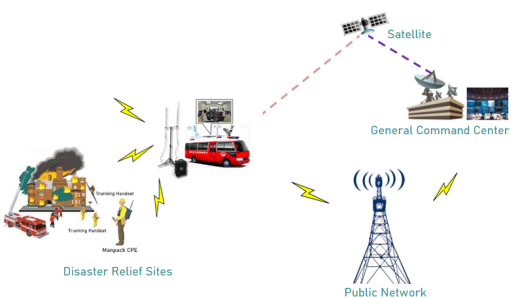 IFLY believes that the broadband trunking and visual command portable emergency system will play an crucial role in protecting lives and property during an emergency rescue.