The climate in spring is dry, and it is the high season for forest fires. Forest fires often occur in remote areas with trees and complex terrain, and it is difficult for conventional 4G networks to effectively cover them. Therefore, when a fire occurs, the problem of poor communication often prevents the people in front from communicating information to the command center in a timely manner, and the command center cannot quickly make command and dispatch commands, which hinders the speed of forest fire response.

According to the requirements of "Information Development Strategic Planning Framework for Emergency Management-2018-2022", based on the importance of current forest fire prevention tasks, the construction of wireless broadband mesh self-organization network has become a top priority. Taking the IFLY Mesh wireless ad hoc network system as an example, the wireless mesh ad hoc network system built in the front end can realize real-time communication between the fire rescue team and the command vehicle and command center, and realize multi-channel voice, data, image and other multimedia Real-time interaction of information to ensure smooth communication in the forest fire prevention and disaster relief process. 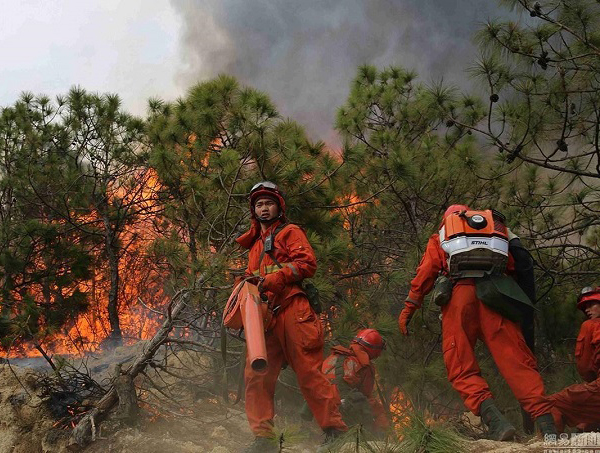 Based on the wireless communication difficulties that the forest fire prevention work may face, Mesh wireless ad hoc network system is a mobile broadband multimedia communication system designed with a brand-new "wireless mesh network" concept. The device has a multi-hop self-organizing network function, which can cover areas that are difficult to reach by traditional devices (such as valleys and canyons) through "relay transmission". In addition, the system equipment is centerless and same frequency equipment. Both the command center and on-site staff can access the same network at the same time to ensure smooth communication between the two parties and achieve unified command. The information of the on-site command headquarters is transmitted through the 4G LTE private network and 4G public company. The network or satellite communication network is transmitted back to the general command center for coordinated operations.

There are various types of MESH series radios. The current product forms include: individual soldier radios, on-board backpack radios, MESH base stations / relays, and drone airborne radios. They are extremely adaptable, practical and easy to use. It can quickly form a decentralized network without relying on public facilities (public power, public network, etc.) through free networking between self-organizing network products.

1. Select a suitable location in the forest area, install an appropriate amount of long-distance wireless Mesh base station on the tower, and take full advantage of the high mountainous terrain. The MESH base station can be deployed and interconnected with the public network base station. Through multi-hop relay and relay forwarding, the collected forest and forest area data and image information can be returned in real time around the clock, and can also be transmitted back to the remote command center through the 3G / 4G public network, which is convenient for real-time viewing and scientific analysis.

2. Deploy vehicle-mounted MESH nodes on command vehicles and forest patrol vehicles to quickly enter the forest forest area, facilitate information collection, patrol monitoring and command dispatch, and provide wireless network support for forest forest area security officers; at the same time, interconnect with satellite communication systems Communicate with each other and send back the on-site information of the forest area to the back-end monitoring and command center at the first time.

3. The security officer carries the individual soldier's MESH node on foot, can go deep into the forest and forest area to perform first-line tasks, which is convenient for real-time voice communication with the commanders and other security officers on the surrounding vehicles, and efficient local coordination; High-definition video images are returned in a timely manner as much as possible to provide comprehensive and clear live real-time images to the rear platform.

4. The UAV equipped with airborne self-organizing network node equipment is launched, which can not only further expand the wireless coverage, reduce the coverage blind area, and improve the quality of video backhaul; but also can combine the air mobile monitoring with the ground fixed monitoring and complement each other. The formation of a ground-space "stereoscopic" monitoring network effectively increases the visibility of the monitoring area.

Mesh wireless ad hoc network system is a centerless co-frequency system, all nodes have equal status, single frequency point supports TDD two-way communication, frequency management is simple, and spectrum utilization rate is high. Any node device can be used as an end node, relay node or command node in the network. At any time and any place, without relying on any other fixed communication network facilities (such as optical fiber, copper cable, etc.), a wireless communication network can be quickly established. All centerless self-organizing devices with the same frequency, including outdoor fixed stations, vehicle-mounted stations and individual portable stations, etc., can automatically form a wireless mesh network only after being powered on, and communicate with each other in real time.

Wireless Mesh ad hoc network mobile base station is designed with military standards: it is easy to carry, durable, waterproof and dustproof, suitable for various harsh environments, and quickly deployed to meet the communication needs of emergency sites. If the uplink of a certain AP fails on the traditional WLAN network, all clients on the AP will not be able to access the WLAN network. Wireless Mesh has the characteristics of self-organizing network and self-repair. Therefore, AP nodes in the Mesh network usually have multiple available links, which can effectively avoid single points of failure.

In the face of emergencies, how to timely, accurate, fast, and in-depth grasp of real-time dynamic information at the scene of the incident plays a vital role in the ability of commanders at all levels to make correct judgments and make operational determinations. The wireless Mesh self-organizing high-performance portable base station adopts single-frequency networking, and strives to simplify the site configuration and deployment difficulty to the greatest extent to meet the requirements of first-line combatants for rapid network construction and zero configuration under emergency conditions.

Utilizing Mesh self-organizing network technology, it is easy to implement NLOS configuration, its automatic relay feature can easily achieve over-the-horizon transmission, and the signal can automatically select the best path to continuously jump from one node to another node, and finally reach no direct vision. Target node. The key technology to solve the "last mile" problem in various fields.

Mesh wireless ad hoc network system has a peak data bandwidth of 28Mbps. Nodes have non-fixed mobile transmission capabilities, and fast movement does not affect high-data bandwidth services, such as voice, data, and video services will not be affected by rapid changes in system topology and high-speed movement of terminals.

The system also has multiple encryption methods such as group encryption (working frequency, carrier bandwidth, communication distance, networking mode, MESHID, etc.), channel encryption and source encryption. It is dedicated to the private network and can effectively prevent the intrusion of illegal equipment and transmitted transmission. The information was intercepted and cracked to ensure a high degree of network and information security.