Dependable emergency communication plays a vital role in emergency response, especially in big city with large population, crowed traffic and  dense high buildings. Once the natural or man-made disaster happens, the first responders must be able to communicate reliably with all the human resources that are involved or will be involved.

On 21st May 2019, IFLY techinical team and the law-enforcing department staffs in Xiamen conducted a testing to verify the performance of our Emmgergency Communication Network System. Let's learn how the system can help.

Purpose of Testing is to:

Equipment Involved In The Testing

1. The Airborne Lte Emergency Communication Base Station(Patron-A10)will be installed on the tethered uav. And during the testing, the tethered UAV will hover at different height to compare the different performance.

2. The patrol car equip with a vehicle-mounted CPE(Knight-V10)will patrol in the city to test how long distance does the base station(Patron-A10) can cover.

3. Four people with Broadband Trunking Handset(Cuckoo-HT2)walk around the base station to test the effective range for the handset.

4. The commander center located in a police station 3km for away from the UAV with a 2watts CPE(Knight-M2) is for commanding and dispatching rely on the dispatch console video and voice communication with patrol car and the four patrol people. 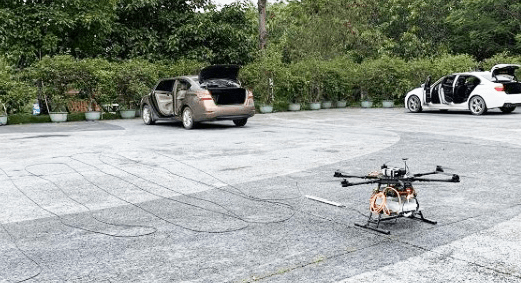 ① Rapidly deploy drone and airborne base station after arriving at the test site:

② Fuel the generator and turned it on quickly.

④ Connect the system to the power source and wait for the takeoff command.

① The command center was deployed in the security room of the Public Security Building.

③ Power the equipment. Wait for the system running normally.

④ Wait for the start command . 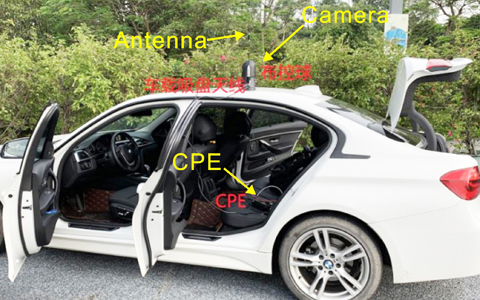 ③ Wait for the start command.

① Four staff members hold one Broadband Trunking Handset in their hand and ready to walk around the station.

2. the patrol car departed according to the scheduled route.The camera’s video was send back to command center via the CPE in real-time

3. The four patrol personnel began to walk around at random and communicate with the command center in real time by voice and video.

The Patrol Car Drives Along the Road Towards to the Bridge.

Video during the entire driving process from the starting point to the bridge is clear and smooth, and there is only a short time stuck when the car turning a corner. And the corner is 7.4km away from the UAV base station. The specific test process is shown below (green for smooth video, yellow for stuck video, red is lost video connection)

There is continuous high-rise blockage between the signal interruption position of the vehicle CPE and the drone. The arrow below shows the occlusion situation:

The figure right shows the last video screen seen by the command center. After the vehicle enters the depth of the building and the auxiliary road of the Bridge, the signal is completely blocked and the signal connection is interrupted.

The picture on the left show the car travels in the opposite direction of the first route. After a period of time, the patrol car was quickly blocked by a mountain, and then the CPE lost the connection, but the video quality was very high before the loss. The specific test process is shown in the below figure (green for smooth video, yellow for stuck video, red for lost video connection)

The effective transmission distance of the Broadband Trunking Handset is about 3.8km. The quality of real-time video transmission during the test is very high. Except the video is slightly stuck at the place 1.3km from the drone because of signal blocked, and during all the rest places the video is smooth and clear. The specific test process is shown in the following figure:

Compared with other emergency methods, the solution that deploys base station in the air through UAV has the characteristics of faster deployment, more flexible networking, wider coverage, and larger user capacity.

This test verified the working performance of the airborne integrated base station (BBU+RRU+dispatching station+core network) on the tethered drone. The whole system need a short deployment time to achieve quickly respond to on-site emergency communication command requirements. During the entire test, the UAV hover time is 3 hours and 40 minutes.

According to the test results, in order to avoid mountain or high building blocking signal transmission, the hovering height of the drone can be raised to solve the problem. The effective coverage radius of the airborne base station is about 10km. In suburban environment, the deployment point can be selected within the range of 5-7km, and in urban environment, the deployment points can be selected within 3-5km.