Abstract: IFLY R&D team developed a new Radio based on MANET Technology to replace traditional DMR, POC, TETRA system. This radio device would connect individual unit members through a mobile ad-hoc network (MANET)based mesh topology to relay voice and GPS data information in a secure and robust manner while retaining the mobility needed for dismounted soldier operations. This paper describes the concept, features of the Ad hoc network in details.

According to whether the mobile communication system has infrastructure, mobile wireless networks can be divided into two categories:

1.1. The first type is a network with infrastructure.

The mobile node realizes communication by means of the nearest base station within the communication range. In such a network, a mobile node is equivalent to a mobile terminal. It does not have routing functions, and only mobile switches are responsible for routing and switching functions. Typical examples of this type of network are cellular wireless systems, office wireless LANs, and so on. 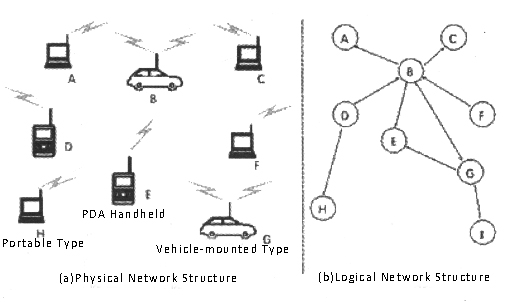 1.2. The second type is a mobile network without infrastructure

Mobile network without infrastructure is a wireless ad hoc network (Figure 1). It is an autonomous wireless multi-hop network. The entire network has no fixed infrastructure or fixed routers. All nodes are mobile and can dynamically maintain contact with other nodes in any way. In this environment, due to the limitation of the wireless coverage of the terminal, two user terminals that cannot communicate directly can perform packet forwarding with the help of other nodes. Each node can be worked as a router, and they must be able to discover and maintain routes to other nodes. Typical examples are interactive lectures, business meetings where information can be shared, information relay on the battlefield, and emergency communication needs.

A wireless ad hoc network is a self-organizing network with a highly dynamic topology and random movement of nodes. Since two (point-to-point) or multiple (multicast) nodes that need to communicate often do not have a direct link and require multiple relays by other nodes, it can also be called a "mobile multi-hop network." The basic idea began in some research projects funded by the US government and military in the 1970s, abbreviated as "MANET". In order to highlight its wireless characteristics, it is also called "wireless mobile ad hoc network".

The wireless ad hoc network is an autonomous system composed of mobile hosts. The main features are as follows:

Compared with conventional communication networks, the biggest difference between wireless ad hoc networks is that they do not need existing information infrastructure network facilities at any time and any place. This is also a form of personal communication.

The node has arbitrary mobility. In addition, the rapid changes in wireless propagation conditions have also caused the network topology to change arbitrarily and quickly in an unpredictable way.

The wireless ad hoc network uses wireless transmission technology as the underlying communication means, which has a lower capacity compared with wired channel. And due to multiple factors such as multiple access, multipath fading, noise and signal interference, the actual bandwidth of the mobile node is smaller than the theoretical maximum bandwidth value.

The mobile node relies on batteries to provide the energy required for operation. Reducing power consumption will be a very important factor affecting the design of network protocols.

In wireless Ad Hoc network, user nodes have both independent routing and host functions, and there is no network central control point. The status of user nodes is equal. The network routing protocol usually adopts distributed control mode, so it has strong robustness and resistance to destruction.However, in the conventional communication network, due to the existence of such centralized control equipment as base station, network control center or router, the user terminal and their position is not equivalent.