What's The Difference Between Drones, Quadcopter, UAV and UAS?

Many people don’t know the difference between the terms drone, quadcopter, UAV and UAS. The drone industry has grown so rapidly that the specific terms for them have had to catch up or be redefined. Drone has been the most popular term in the last couple of years. Everyone has heard the term “drone.” It’s becoming an increasingly popular way to refer to the small (usually) helicopter-like devices that are being flown by millions of people around the globe. However, there’s a host of other terms used to describe them such as quadcopter, UAV and UAS, which can make things a bit confusing.

Here is a brief explanation of the different terms you’ve likely heard to help you understand what each one means and what the difference there is between them.

“Drone is one of the oldest official designations for remotely controlled aircraft in the American military lexicon. in 1935, when the chief of naval operations Adm. William Standley, visited Britain, he was given a demonstration of the Royal Navy’s new DH 82B Queen Bee remotely controlled aircraft that was used for anti-aircraft gunnery practice. On his return, Standley assigned an officer, Cmdr. Delmer Fahrney at the Radion Division of the Naval Research Laboratory, to develop a similar system for US Navy gunnery training. Fahrney adopted the name drone to refer to these aircraft in homage to the Queen Bee. Drone became the official US Navy designation for target drones for many decades.”

Drones refer to an unmanned aircraft that can fly autonomously without a human in control. It can actually be used to describe a wide variety of vehicles. For example, there are seafaring such as a submarine or ground based autonomously vehicles that also count under the given definition of drone.

Surely, the most popular usage of this term is an aircraft which can be remotely or autonomously guided without a pilot inside.

“UAV” is a more technically accurate description preferred by experts and professionals. It refers specifically to aircraft that can be remotely piloted without requiring a human on-board to fly around to collect the required data and imagery While this term can be used accurately to describe drones. UAV is a drone? Basically, Yes! As you saw the name Drone started out its life as a military term, but as their uses became more commercial and recreational the name made the transition as well. Drone is the most popular synonym for an unmanned aerial vehicle (UAV). So these two terms are often used interchangeably when referring to drones, however there is a clear distinction between the two.

UAVs need to have autonomous flight capabilities, whereas drones do not. Therefore, all drones are UAVs but not vice versa. But for now, go ahead and use the terms you like and no one will scold you.

A type of unmanned aircraft which derives both lift and propulsion from four sets of horizontally revolving overhead rotors. It is capable of moving vertically and horizontally, the direction of motion being controlled by the pitch of the rotor blades. 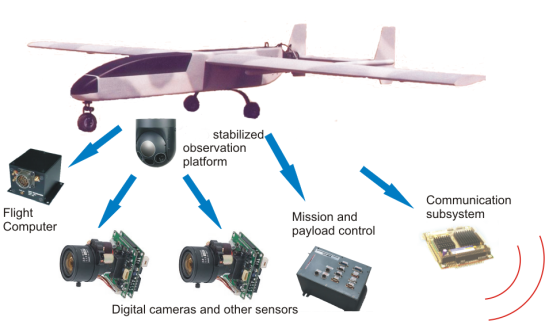 “Unmanned aircraft systems” refers to the entire system required for advanced drone operations including the aircraft, ground control station, and communications system. UAS can either require a human pilot on the ground or be fully autonomous without need for a human operator. Any UAS includes a UAV as the aircraft component of the system.

Usually the term is only used for more advanced unmanned aircraft that would normally not be called drones or used for civilian use.

It only seems logical that a term or word would be adopted to fit the new vehicles that are buzzing around the world. If there is not a new term, there is going to be a lot of confusion with how fast the drone industry is growing. With this industry's fast development, drones are alredy used form different fields to help people to explore the unkown world which is impossible before. If you want to see what your drones see, please contact IFLY. They supply long range FPV COFDM video transmitter.